All weekend Masses Cancelled until further Notice at Gurranabraher Parish

Following a restriction on all gatherings of over 100 people issued by the Irish Government on Thursday, 12th March, to ‘slow down’ the spread of the Corona Virus, all weekend Masses have now been cancelled at Gurranabraher Parish Church.

In a news release from Bishop Fintan Gavin late on Thursday, he says: “In light of this [Government directive] in the Diocese of Cork and Ross, all public Weekend Masses will be discontinued until further notice. This also refers to Masses for St. Patrick’s Day. I would ask you to celebrate Sunday Mass privately for the people of your parish and, where available, to have it broadcast via webcam. My hope is that the people of your parish, while not able to join you physically, could join you spiritually in that Mass.

As I said in my earlier e-mail, Mass will continue to be live-streamed from the Cathedral at www.corkcathedral.ie. It is my hope to celebrate the 11.30 am Mass there each Sunday.

Funerals, weddings, baptisms and weekday Masses may continue as long as the attendance does not exceed 100 people.”

Parishioners will be kept informed of developments at above parish via our webpage. These are indeed trying times for the Christian community who tries to keep faith with the Lord.

Also to be effected by this latest Government directive is the Sunday night Bingo at Gurranabraher Parochial Hall. Probably the longest going Bingo in Ireland; it is for many older people the only source of entertainment they have. We hope that this crisis will soon pass and that the Bingo will resume again.

The Corona Virus and other Sicknesses

At a time of year when numerous illnesses are abroad – most particularly the Corona virus that threatens to reach pandemic proportions – people should use common sense in their day-to-day activities. A few simple procedures can reduce considerably risks of contamination:

i) Wash hands regularly using soap and warm water;
ii) Ensure all hard surfaces that are frequently touched, such as door handles, hand rails, taps, etc, are cleaned regularly with a household detergent or antiseptic wipes.
iii) Do not cough and sneeze directly into your hands use tissues and dispose of them afterwards. iv) Avoid as much as possible making contact with your face. If you feel the symptoms of flu or virus it is advised that you do not visit the sick to avoid compromising both your own health and the health of the person you are visiting or their families.

Remember, those who have flu are under no obligation to go to Mass. If you have flu-like symptoms please stay at home, rest, stay well hydrated and, if necessary, seek your doctor’s help.

Mass is available daily via different internet websites and on the Catholic Channel, EWTN.

Wednesday, 25th September, was a significant day in the life of our parish as the light on the roof cross was relit after many years. This cross was seen day and night all over the city of Cork – until it fell into disrepair about 15 years ago. It was, and remains, a reminder that Jesus, the Saviour, offers his protection and blessings on this city and on its people. We thank those who petitioned over the years for the cross-light to be restored. The removal of trees earlier already made the building the central landmark looking north from any part of the city.

Under ideal conditions, parishioners from Gurranabraher trekked the 6km route from outside Ballingeary to Gúgán Barra on Easter Monday last – arriving at Gúgán Oratory for Mass at 3pm. Many visitors to Gúgán on the day availed of the Mass as well. It was a truly magnificent day with everybody thoroughly enjoying everything about the day. We thank the Lord Jesus, whose Resurrection we celebrate at this time, for providing the conditions for opening our minds and hearts up to God’s glory. Moladh go deo le Dia.

Work is now well underway on church roof at Gurranabraher after a slow start in April – due to inclement weather. With the arrival of bright, sunny days work progresses – and Consultant Engineers report that the work is up to schedule. The completion date is September ending.

Gurranabraher March for Life in Dublin

A number of parishioners of Ascension Parish, Gurranabraher, travelled to Dublin on Saturday March 10th to walk with the tens of thousands of others from all over Ireland indicating that Ireland would retain the 8th Amendment to the Irish Constitution. The sheer joy, enthusiasm and goodness present at those marches from young and old is truly reinvigorating. 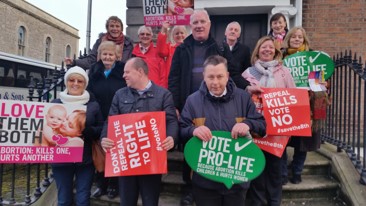 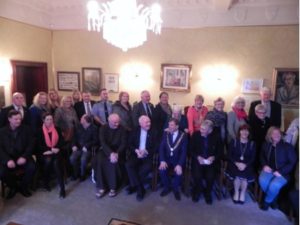 We sincerely thank our Lord Mayor, Cllr. Tony Fitzgerald, Bishop John Buckley and other Public Representatives for their presence at City Hall on Thursday last as we launched our appeal for funds to replace the roof on Gurranabraher church. It was a really great occasion enjoyed by all present. We sincerely thank the Lord Mayor for taking the time from his heavy schedule to host the event. We know that Cllr Fitzgerald, a former parishioner of Gurranabraher – really wants to see our Church regain its former splendour. May God bless all who were present at the event.

All Masses were cancelled at Ascension parish today, Friday, due to very heavy snow falls. Indeed, the parish is generally in lockdown mode with very few vehicles making it up Cathedral Road.

Work on Church Roof to begin

Work on Church Roof to begin this coming Week
At long last, work is to begin this week on church roof. The contractors, M/s Jim Davis Construction will carry out the work over a four month period. Scaffolding will soon begin to be erected that will cause some inconvenience for Church goers – but the church will continue to be used throughout the period of construction. The total cost of the project is amounting to over €460,000.00. This is a massive project we are taking on – but it is a project that cannot be delayed any longer for the roof is deteriorating rapidly – and would soon become a health and safety issue. (Were that judgement to be made then the church would be closed – possibly for good). Now that the work is to begin we ask Almighty God to crown our efforts and bring the project to completion. We appeal to parishioners to see if they are in a position to make greater contributions to our Monthly Building Fund appeal.

Lord Mayor and Bishop Buckley to Launch Fundraising Appeal for Church Roof
On this coming Thursday, March 8th at 5pm at Cork City Hall, Cllr. Tony Fitzgerald, the Lord Mayor of Cork and Bishop John Buckley will launch our Fund Raising Appeal for the re-roofing of Ascension parish, Gurranabraher. Cllr Fitzgerald, a former parishioner who has had huge involvement at Ascension parish over many years, has kindly agreed to use his Office as Lord Mayor to appeal to the citizens of Cork to respond generously to our appeal for funds.

Gurranabraher church is a huge feature of Cork city’s skyline towering over the other buildings on Gurranabraher hill – and visible from many different parts of the city. The bright illuminated cross is a reassuring sign to the people of Cork that despite tragedy, pain and hardship God lives among his people.