Anointing of the Sick

Sacrament of Anointing of the Sick 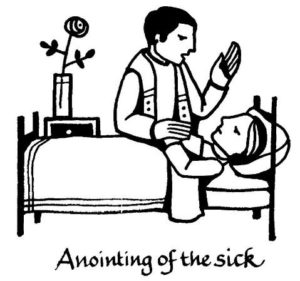 The Sacrament of the sick is a special sacrament for the sick and those suffering in mind or body.

The Catechism of the Catholic Church’s section on the Anointing of the Sick defines the purpose of the sacrament as “the conferral of a special grace on the Christian experiencing the difficulties inherent in the condition of grave illness or old age.” (Catechism, 1527).

In his Gospel St. Mark (6:12-13) gives us an indication of this sacrament of the sick when he tells us that the apostles, going forth, “preached that men should repent, and they cast out many devils, and anointed with oil many sick people, and healed them.”

However, the classical description which the Bible gives of the sacrament of Anointing of the Sick is found in the Epistle of St. James:
“Is any one among you sick? Let him bring in the presbyters [priests] of the Church, and let them pray over him, anointing him with oil in the name of the Lord. And the prayer of faith will save the sick man, and the Lord will raise him up, and if he be in sins, they shall be forgiven him.” (James 5:14-15)

The Oil of the Sick

The oil used in administering the sacrament of Anointing of the Sick is called Oil of the Sick. It is one of the three Holy oils blessed by the bishop of the diocese at his cathedral on Holy Thursday morning, the other two Holy Oils being Holy Chrism and the Oil of Catechumens, which is used in Baptism.

Oil of the Sick is pure olive oil – nothing being added except the blessing of the bishop. Its appropriateness as part of the outward sign of Anointing of the Sick is evident from the healing and strengthening effects which are characteristic of olive oil.

The essence of the sacrament lies in the actual anointing and the short prayer which accompanies the anointing.

In giving the sacrament, the priest anoints the sick person on the forehead and hands. During this anointing, the priest says: “Through this holy anointing may the Lord in his love and mercy help you with the grace of the Holy Spirit. May the Lord who frees you from sin save you and raise you up.”

In reality, the Anointing of the Sick is to offer prayers for possible recovery, with the more important intention to give strength to the soul of the sick person. Often, when people are sick, they get discouraged, depressed, angry, annoyed, and afraid. The Church believes that the sacrament offers a special grace to calm the spirit. If physical recovery is God’s will, so be it. If not, then the person needs the grace, strength, and encouragement to bear the illness with dignity.

Administering the sacrament, the priest dips his finger in the oil stock, which often has cotton inside to absorb the oil and keep it from spilling and going bad. He dabs some on his thumb and then anoints the head, saying, “Through this holy anointing may the Lord in his love and mercy help you with the grace of the Holy Spirit.” Then, if possible, he anoints the palms of the person, saying, “May the Lord Who frees you from your sins, save you and raise you up.” If it’s an emergency, such as a patient in the trauma center, the priest can anoint any part of the body that’s available if the doctors and nurses are working on the head and hands of the injured person.

The Sacrament of Anointing of the Sick absolves all sins the person is sorry for but did not previously confess in the Sacrament of Penance. If the person can’t make a confession, the anointing compensates by forgiving sins she would’ve confessed were she able to do so. Because of this aspect of absolving sins, deacons can’t anoint, but priests and bishops can.

The Catholic notion of redemptive suffering, that is, uniting your own suffering with the crucified Jesus gives a person’s unavoidable suffering meaning and purpose. This notion is explicitly and implicitly expressed in the Sacrament of the Anointing of the Sick.

Because many sick and injured people recover nowadays, or at least go into remission, Catholics are able to receive the Sacrament of Anointing of the Sick as many times as needed. The elderly, people with many ailments, and those with a deadly or serious disease, chronic pain and suffering, or recurring illness, can and should be anointed often.