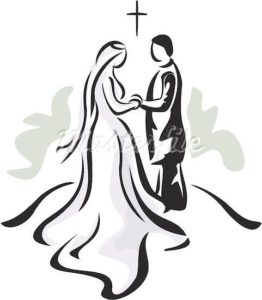 The Catholic Church distinguishes between a legal marriage and the Sacrament of Matrimony. Legal marriage is conferred by the State. The Sacrament of Matrimony is conferred on two human beings – one male and the other female, both of whom are free of any previous bond of marriage, (and where at least one is Catholic) – who wish to enter freely into an irrevocable sacred covenant with God and with each other to lifelong fidelity.

Proof of Baptism and Confirmation is required – and the couples’ freedom to enter into this communion of love must be verified before a Marriage can take place.
Where one of the parties is not baptised – or a member of a different Christian denomination special dispensations must be obtained from the local bishop.

In most dioceses, Catholics who want to marry are asked to meet with a priest or deacon of their parish at least six months before the wedding. Only the priest/deacon of the parish has lawful jurisdiction to carry out the pre-nuptial enquiry to ascertain the freedom of both parties.

The couple will be advised to undergo a Pre-Marriage instruction so that both parties will come to understand the meaning and permanency of Christian marriage. The Catholic Church in demanding this notification period and suitable instruction wishes to prevent impulsive decisions or anything done in haste, rashness, or imprudence because matrimony is for life.

Making a wedding a valid Sacrament

Making a wedding a valid Sacrament of Matrimony requires the presence of a priest or deacon, a bride and groom and two witnesses to be present for the celebration – unless dispensations are given.

The bride and groom are the real ministers of the sacrament, because their “I do’s,” make them husband and wife. The priest or deacon is just an official witness for the Church – necessary, but still just a witness.

Most Catholic weddings take place during a wedding Mass. Vows are exchanged as part of the Mass itself. If either the bride or groom isn’t of the Catholic faith, the Church usually suggests a wedding ceremony outside Mass.

Where a Catholic has previously married in a secular ceremony and now wishes to reconcile with the Church a Convalidation ceremony is required to make that marriage valid.

In the case where a person had married before and now wishes to marry another in a Catholic ceremony the following rule of thumb should be noted;